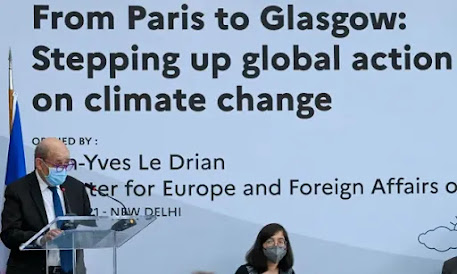 2021 United Nations Climate Change Conference (COP26) will begin on Nov 1 and end on Friday Nov 12 in the Scottish Event Campus (SEC) in Glasgow. As of right now in May, the preliminary Sessions of the subsidiary bodies are underway in a virtual platform. This continues the process of meetings and negotiations by the different representatives of countries that are trying to reach a commitment to the 1.5C scenario of the Paris Agreement in 2015. There was no formal framework agreed to in 2015, just an agreement to the cap of carbon emissions that would keep the global ecosystem from exceeding 1.5C by the immediate reduction of green house gas emissions.

The Paris Agreement was an exercise in coming to grips with the enormity of defining the scale of the global emissions reductions and the rapid shift required to get the world to zero carbon.

President Obama was able to formally enter the United States into the agreement under international law through executive authority, since it imposed no new legal obligations on the country. Trump disastrously pulled the US out of the treaty the minute he got into office, on June 1, 2017, and President Biden reinstated US participation on January 20 of this year.

The website for the May-June UNFCCC conference is here. Its purpose is to begin negotiations and hammer out agreements on key aspects of the talks in Glasgow. The United Nations Framework Convention on Climate Change is an international environmental treaty against climate change, negotiated and signed by 154 states at the United Nations Conference on Environment and Development, informally known as the Earth Summit, held in Rio de Janeiro from 3 to 14 June 1992.