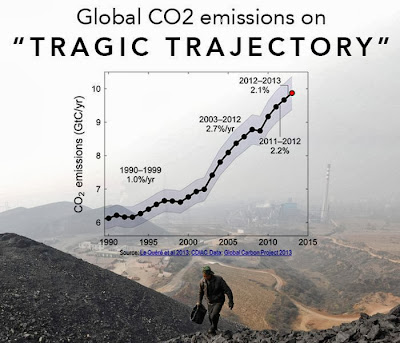 The graph above shows the rate of carbon emissions nearly doubling from a decade earlier despite climate negotiations and studies over the last decade that document tremendous climate changes from these carbon emissions. The summary of these changes has been produced as a video produced by the International Geosphere-Biosphere Programme and Globaia and funded by the UN Foundation for the launch of the Intergovernmental Panel on Climate Change (IPCC) Fifth Assessment Report. CO2 levels in the atmosphere have risen about 40 percent in the last century. The oceans have absorbed 97 percent of the additional heat from those emissions, raising the levels of the oceans as well as making them more acidic, which is the only reason global temperatures have not risen much faster. However, the oceans will not continue to soak up all the extra heat forever.

Various studies have shown the flaws in current climate modeling that demonstrate that the planet is heating up far faster than the original models predicted, as the arctic ice measurements have shown. A new model in development, RASM, has the potential to greatly alter current global climate models.It provides a better understanding of what's actually happening to planetary systems as they absorb this carbon.

With the conclusion of discussions in Warsaw at COP19, it's now evident that there is an almost complete lack of consensus dividing the poorer countries and the large polluting countries of the north. Warsaw was supposed to be the “Finance COP” to provide promised money promised to poor countries in Copenhagen in 2009, but failed to produce these dollars. Countries like Germany, Switzerland and others in Europe only managed to scrape together promises of 110 million dollars into the Green Climate Fund. Developing countries wanted a guarantee of 70 billion a year by 2016 but were blocked by the U.S., Canada, Australia, Japan and others. The groundwork for loss and damages was laid in a last-minute political brokerage in Warsaw.

Climate scientists knew about climate change very significantly by the mid-'80s. It became a major political issue by the time of the Earth Summit in 1992. We're now 21 years later, and we’ve done absolutely nothing about it but watch emissions rise, day in, day out, year in, year out. This has created the tragic trajectory that calls for a radical response. With large-scale impacts of climate change becoming discernable from the background of natural variability, concern is rising over the global community’s failure to control emissions. The International Energy Agency (IEA) captures this pivotal moment in history, when noting that "The current state of affairs is unacceptable … energy-related CO2 emissions are at historic highs” and emission trends are “perfectly in line with a temperature increase of 6 degrees Celsius, which would have devastating consequences for the planet”. In a similar vein PricewaterhouseCooper (PwC), the UK Government chief scientist and a growing body of academics and researchers are allying current emission trends with 4°C to 6°C futures.

Although the IPCC reports appear to be fueling the consensus for future climate agreements around the "low emissions" scenario, it is now evident that these emissions goals are too generous and will result in runaway climate change much faster than anyone had anticipated. So, because of growing global concern and especially panic from the poorer southern countries, a group has decided to stage a conference to explore far deeper carbon reduction than has been on the table in COP19. The Tyndall Centre Radical Emission Reduction Conference will take place on Dec. 10 and 11, and discuss how to implement radical carbon reduction scenarios.

Naomi Klein, author of 'The Shock Doctrine' and 'No Logo', will be the keynote speaker. Based on her article in the New Statesman and the research underpinning her forthcoming book, Naomi Klein argues that the “revolutionary nature of climate science” demands a paradigm shift in our response to climate change.

This portends a grassroots movement which would also drive future climate change agreements and commitments into far deeper carbon reductions than have been currently proposed. Even with the possibility of restructuring economic policies and imposing "wartime mobilization" with these measures, due to the inaction on the part of governments worldwide.

Resource: Summary for Policymakers of the Working Group I contribution to the Fifth Assessment Report
Posted by LPB at 1:00 AM 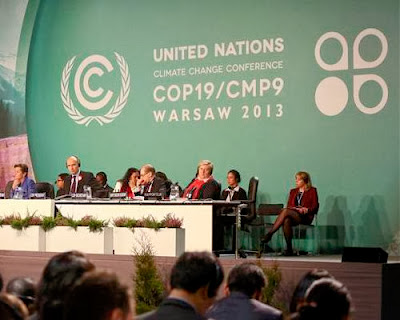 World leaders are now gathering in Warsaw, Poland on Nov. 11-22 for the 19th United Nations Framework Convention on Climate Change, or COP19. At COP17 two years ago in Durban, South Africa, countries agreed to establish an international climate action agreement by 2015 that would be applicable to all countries, with the goal of limiting global temperature rise to 1.5-2°C above pre-industrial levels. This year’s convening is another step towards that agreement, set for COP21 in Paris.

The devastation just wreaked by Typhoon Haiyan in the Phillippines has cast a pall over U.N. climate talks Monday as the envoy from the Philippines broke down in tears and announced he would fast until a "meaningful outcome is in sight."

The UN conference aims to stabilize greenhouse gas concentrations in the atmosphere “at a level that will limit dangerous interference with the climate system.” The meeting takes place from now through next Friday at Warsaw’s National Stadium. International delegates are working toward a universal UN-backed treaty to be in force by 2015 and take effect by 2020. To achieve this goal, participating countries must agree on standard limits to future greenhouse gas emissions.

A key negotiating point will be the degree to which emissions must be curtailed, and the necessary timeframe for doing this. The IPCC report issued last month defines four timeline scenarios (Representative Concentration Pathways or RCPs) plotting amounts of carbon burned and resulting global average temperatures, depending on when global greenhouse gas emissions (GHG) peak and then decline.

The official schedule and information feed from this session is here.

The current goal of the negotiations is to forge an agreement, to be signed in Paris in 2015 and to come into force by 2020, that would involve substantial reductions in greenhouse gas emissions from all the major economies, as well as commitments from poorer countries.

Sizing up Warsaw in Week 2, from Kennedy Graham:

And finally, from Motherboard, a video that covers the IPCC scenarios:

As the video fast-forwards us through time, it illustrates the possible future of our little blue marble as it spins in space: warming temperatures, shrinking sea ice, increasing sea levels, amplifying ocean acidity. It’s as grim as it is beautiful, but all is not necessarily lost yet.
Whether you see it as a disheartening or hopeful proposition, the final takeaway is this: “The scale of change depends on decisions made now… It is up to societies now to decide the future we want.”