Rest of the World Moves On 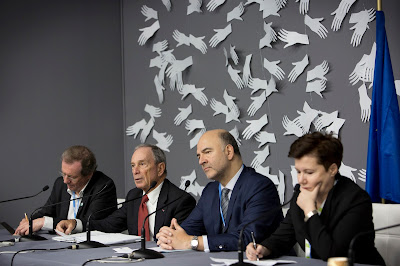 Climate action in the US and the Rest of the World (ROW) continues apace, despite the machinations of the new and disorganized Trump administration. The global climate pact in Paris was the result of extraordinary turnarounds by the world’s two greatest greenhouse gas polluters, China and the U.S., which had long resisted climate action. A myriad set of strategies has been set in motion to put the world on the path to net zero emissions.

Six months after the successful Paris Climate Agreement of December 2015, two of the world’s primary city-led climate change and energy initiatives, the EU Covenant of Mayors and the Compact of Mayors, announced the formation of a new, first-of-its-kind global initiative  of cities and local governments leading in the fight against climate change. This single initiative will create the largest global coalition of cities committed to climate leadership, building on the commitments of more than 7,100 cities from 119 countries and six continents, representing more than 600 million inhabitants, over 8% of the world’s population. Then in November of last year, officials from Los Angeles (Mayor Garcetti), New York, Tokyo, Beijing and 82 other major cities — including more than 40 mayors —  met in Mexico City to share ideas about how to reverse course on climate change. The cities belong to C40, a network launched in 2005 to combat climate change. In an analysis released Wednesday, the group said that actions taken over the next four years will determine whether cities do their part  in meeting the goals of the Paris agreement on climate change signed by nearly 200 countries.

Back in December of 2015, the Compact of Mayors and the Covenant of Mayors partnership was founded on the shared goal of supporting cities around the world to reduce emissions and adapt to climate change. The core principles of the partnership will be to recognize local governments as key contributors to a global climate solution, work with city networks as critical partners to support participating cities, capture city climate action plans from registration to implementation, and emphasize importance of reducing GHG emissions and fostering local climate resilience. In partnership, the Covenant of Mayors and the Compact of Mayors will work with cities around the world to ensure robust solution agendas, focusing on sectors like transportation and buildings where cities have the greatest control. The partnership will enable the Compact and the Covenant to streamline reporting systems that are working to help cities measure their work.

On December 1, 2016, the former UN climate chief, Christina Figueres, was announced as the vice chair of the new Global Covenant of Mayors for Climate & Energy. It is expected she will play a key role in running the coalition of more than 7000 mayors.“Cities are where the future is created,” Figueres tweeted after the announcement and said she is looking forward to her role in the new coalition. Figueres will work closely with former New York City mayor and billionaire Michael Bloomberg and EU Commission vice-president Maroš Šefcovic, the co-chairs of the covenant. The Covenant of Mayors information website is here.

Deadline 2020 is the first significant routemap for achieving the Paris Agreement, outlining the pace, scale and prioritization of action needed by C40 member cities over the next 5 years and beyond. This report has been delivered through a collaborative partnership between C40 and Arup, the global consultancy firm. Ove Arup (ARUP) is an independent firm of designers, planners, engineers, consultants and technical specialists offering a broad range of professional services and is one of the premier engineering firms for the top major architectural design and planning projects across the planet.

ARUP issued a science-based global carbon reduction effort with the 'Deadline 2020' report. An analysis of the contribution C40 cities can make to delivering the Paris Agreement objective
of limiting global temperature rise to 1.5 degrees.

"This ARUP report has been delivered through a collaborative partnership between C40 and Arup, the global consultancy firm. Arup has worked with C40 since 2009 to develop strategic analysis and research that is central to progressing our understanding of how cities contribute to climate change mitigation and adaptation. This is why in June 2015, Arup announced a major partnership with C40, committing $1 million of professional support over three years to help cities take meaningful action against climate change. This partnership is founded on Arup’s independent and evidence-based approach, alongside C40’s longstanding belief in “measurement for management”. The partnership supports a strong analytical research agenda while helping city actors to identify opportunities, collaborate and develop practical solutions to accelerate and expand action on climate change."

Update 1/25/17: For Trump's crew, however, the past is forever prologue. If fossil fuel was good in the 18th century, it must be good in the 21st. The battle plan has shifted.