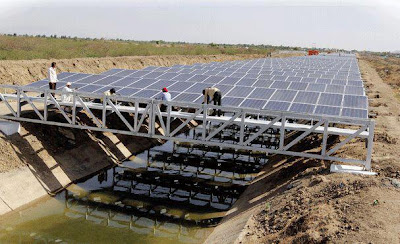 California has miles upon miles of aqueduct carrying open water across scorched deserts, particularly the Colorado River Aqueduct. The evapotranspiration of this water is fairly significant in this situation, despite denials from the Metropolitan Water District. Their claim that Federal permission is required to do something like this only applies to portions of the aqueduct system. What better way to reduce the loss of water in the vast aqueduct system, as well as produce additional power for the extremely high cost of pumping water uphill in places to get it into the Weymouth Plant in La Verne?

Provide solar panel covers along the stretches of aqueduct in the desert adjacent to the pumping stations, just as they have been built in India. These panels over a half a mile stretch of the Narmada Canal in the Indian state of Gujarat, now generate 1 MW of power distributed through nearby villages. If a third world country can do it, why can't California's Water Agency do it? Considering the critical water issues this state is dealing with, you'd think water conservation and power supply would be a top priority. The history of water in this state is complex and comprised of some of the biggest water engineering feats in history. The State is headed for even more complex engineering and supply issues with the plan proposed by Governor Jerry Brown, which contains provisions for a new Peripheral Canal that has been objected to by many residents, farmers, fisheries and environmentalists. It's a legacy from his father, former Governor Pat Brown. But the objections raised in earlier decades to this idea are being reinforced even more for this current plan, given the fact of local climate change as permanent drought.

The position of Restore the Delta is this: "The delta is in a biological meltdown. Taking more water won't restore an ecosystem that's already hemorrhaging from lack of flows," Jennings said. "This plan is not a path to restoration; it's a death sentence for one of the world's greatest estuaries." The price tag for this plan is also a huge concern for taxpayers. Estimates run as high as $50 billion for the total costs of the plan and the greatest share of all these additional costs will be borne by all California taxpayers, who will be saddled with increased borrowing and 30 to 40 years of interest repayments.

Typical of water politics in this state, the simple and ecologically balanced solutions get shoved out in favor of massive plumbing projects. Keeps the big boys employed and the rates on the rise.

Update 3/28/21: Why Covering Canals With Solar Panels Is a Power Move

Update 7/8/21: Huge Supply of Water is Saved From Evaporation When Solar Panels Are Built Over Canals

Update 7/18/2021:  Scientists in California just ran the numbers on what would happen if their state slapped solar panels on 4,000 miles of its canals.