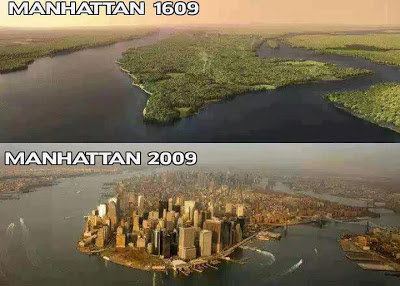 Given that the immense damage inflicted by Hurricane Sandy last week on New York City's subway system was entirely foreseeable under the climate change scenarios, one has to seriously question the ability of cities and states to prepare for a future of climate change, let alone make intelligent choices about local ecosystems and energy use.

If one looks back in time to an era before the development of the colony of New Amsterdam, one would see the natural waterways and vegetation that existed as an ecosystem at the turn of the 17th century, nearly 175 years before the United States came into being as the 13 colonies. This was a living ecosystem that could weather the storms and vagaries of the weather system, as well as providing a buffer for the life on land. The natural processes have been in dynamic balance for millions of years. Then the land was built over, smothered, and the Industrial Revolution of 200 years ago began pumping out the emissions that have led to dangerous climate change, with the attendant increase in catastrophic climate events.

Human habitation has its place on the earth, but we've overrun it. This process, driven by economics of "growth" that rely on consumption of resources and expanding population, is a destructive overgrowth, much like a bacteria that kills its host. This progression can be seen on Manhattan maps that show how the marshes were built over, and the low lying areas created by this growth were then developed, destroying the natural buffers provided by the waterways and marshes.

This is the kind of uncontrolled building and development that creates massive financial and physical losses when the coastal areas are built out. Ian McHarg did a classic study in his book, "Design With Nature" that showed how the dunes along the shore are critical for the protection of the built environment set in back of the dunes away from the shore. This permaculture approach is a fundamentally necessary part of truly regenerative design for human habitation.The options for facing climate change in coastal cities boil down to relocation, building infrastructure to cope with the new planet we're on, or cutting carbon emissions drastically. It's time for cities and their councils and planners to take serious responsibility for providing for public safety in dealing with climate change.

NYC Mayor Bloomberg's qualified endorsement of Obama's record on climate change, on November 1 of this year, resulted from the impact of Sandy's destruction of the city. He spelled out the actions of the C40 Cities Climate Leadership Group and their efforts, and made it clear that it's time for national leadership on this issue. There's a great infographic from this group here.