Back of the Napkin 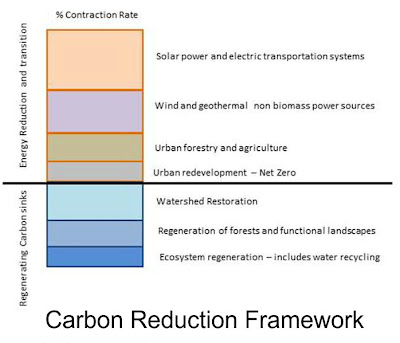 Architects scribble on the back of a napkin all the time in order to capture ideas that erupt in odd corners in the wee hours. That approach might be beneficial for looking at the problem of dealing with climate change, and the fact that it's necessary to begin immediately with big carbon reductions in order to ensure global survival. This is not an overstatement.

So, each year, 7 GtC (Gigatons of carbon) are emitted globally. The USA produces about 20% of it, or approximately 1.4 GtC. So how much carbon reduction is possible by curtailing emissions and improving the carbon sinks? Limiting this napkin scribble to a direct reduction of California's portion of the 1.4 GtC per year and ignoring the global complexities, a straightforward approach is as follows:

Using the data for carbon emissions shown on Google Earth, one then goes to the Vulcan Project site and extracts the data for California, and you get 101,840,000 metric tons which have to be cut back in some portion EACH YEAR.

Then, using the emission reduction goals laid out in 2005 by our esteemed Governator, we follow the requirements  for these reductions targeted with the years by which these goals must be met. That will tell us how much carbon emission has to be cut using various strategies, at least until these goals are modified by some kind of global agreement.

Then these strategies have to be put into place to cut these carbon emissions; they need to be comprehensive and synergistic in order to accomplish these goals. So, doing the math, they can be laid out in a standard framework from which the many, many ways of reducing carbon can be accomplished. In addition, carbon sinks can be expanded and improved with the restoration of natural landscapes and watersheds. It's a two-pronged strategy.

As you can see from the framework, the carbon emissions can be tackled by sector depending upon what conditions exist in the various counties and cities in the state. The first steps involve the use up-front "hurt money" such as one finds in real estate development, in order to pay for coal and oil plant closures and rapid expansion of solar plants and wind farms, for example. Transportation efficiencies must increase drastically, particularly around the coastal ports. Structures must be constructed in existing urban areas that are "Net Zero" in energy and water consumption. Cities themselves can become regenerative. The list goes on and on, many people have developed these, and my list is here.

Enforcement of the strategies laid out within the framework will need careful oversight, and it's possible to measure carbon emissions in real time at specific locations. But the interesting thing is, by implementing many strategies at once, it's very possible to reduce carbon emissions quickly and to magnify this effect each year. Once the shift starts, it's simple to keep reducing the carbon because removing pollution and emissions sources increases the capability of the new power networks to grow rapidly. It's especially effective if the carbon sink restoration is allowed to take hold early on, as these restored areas of natural processes will do what life does, and that is, grow and function. All we have to do is get out of the way (i.e., shrink human habitation).

As the use of oil becomes unnecessary, its value diminishes, and it's no longer a fiscal lever for global power and conflict. For example, Randy Essex of RMI examines the futility of old-think with respect to oil supplies in the Middle East, coupled with military intervention. This perpetuates a destructive cycle which can be dispensed with by moving to renewable electric supplies with the tremendous savings in production and transport.Because of that, it behooves the large carbon-emitting countries to put a portion of their defense budget into shifting into a zero-carbon world because of the significant direct benefits it provides for national security. Germany has already started down that road. Ultimately the payoff for countries that are not large emitters is the preservation of their cultures and biospheres with the adoption of the new energy technologies.

As I said, this is just the back of a napkin.
Posted by LPB at 1:00 AM
Newer Post Older Post Home