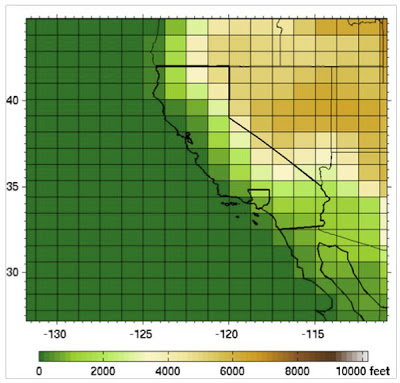 The City of Los Angeles has posted its Climate Change portal which examines in detail a study area that is simply one pixel in the large climate models:

The study looked at the years 2041–60 to predict the average temperature change by mid-century. The data covers all of Los Angeles County and 30 to 60 miles beyond, including all of Orange County and parts of Ventura, San Bernardino and Riverside counties, and reaching as far as Palm Springs, Bakersfield and Santa Barbara. The study overlaid this entire area with a grid of squares 1.2 miles across and provided unique temperature predictions for each square. This is in contrast to global climate models, which normally use grids 60 to 120 miles across — big enough to include areas as different as Long Beach and Lancaster.

It's a recognition that Los Angeles takes climate change very seriously; it's not a theoretical problem, and is trying to help the businesses and residents of the city prepare for the coming changes. The local Los Angeles Times has covered the issue of climate change denial in its press coverage. For example, the attitude of the climate deniers is challenged, in an interview with E.O. Wilson:

What are the consequences of this attitude on, say, climate change?

I've been asked this numerous times: Are we going to be able to pull this thing out in time? I believe in a dictum I first heard from the [deputy] prime minister of Israel, Abba Eban. He said, when all else fails, men turn to reason. Maybe this will happen in time, but right now we are pouring species and biodiversity down the drain for nothing.

Another LAT article questions the wisdom of ignoring the problem:

Droughts in Texas and Louisiana, melting glaciers in Alaska and wildfires in Arizona -- with combined losses running into the tens of billions of dollars -- might lead some to conclude that fighting climate change would be cheaper than ignoring it. But such logicians probably aren't members of Congress from those states, many of whom have deep ties to the oil and gas industry or are simply philosophically opposed to environmental regulation.

While climate change is really a discussion about carbon emissions and how to drastically reduce them, the conversation in Los Angles has been about local efforts in city planning and the restoration of the LA River. What's not mentioned is the impact of the Ports of Los Angles and Long Beach, the single biggest pollution source for the region, as well as their transportation infrastructure which stretches all across Southern California via the Alameda Corridor and designated highways. This transit corridor issue has reared its ugly head again with a new attempt by Metro to run freight through local cities. The surrounding communities are dead set against a massive, destructive proposed project which will drastically increase truck emissions, the 710 connector.

That issue aside, the approach that the city is taking in its local region is an emphasis on restoration projects, which includes habitat regeneration and the accompanying job creation that results from it. These projects can go far beyond simply restoring ecosystems, as a Volkswagen production facility in Mexico demonstrates.