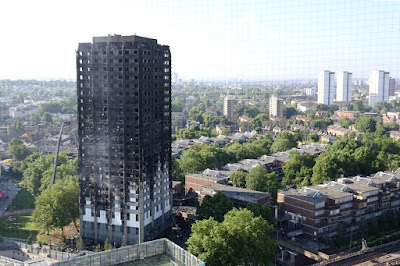 The blaze that erupted in London's Grenfeld Tower in June of 2017, resulting in the utter destruction of the structure inasmuch as its steel framework remained standing, is under examination by the government as well as media sources. The search for blame for the inferno resulting from cheap exterior cladding has unearthed a disingenuous claim by the Daily Mail that environmental requirements were the cause of the faulty design, as cited by the Carbon Brief analysis published in The Guardian.

"On page eight is a full-page commentary from Ross Clark, sitting under the headline question: “So did an obsession with green targets lead to inferno?” Clark, who has published various climate sceptic articles and written a book attacking regulations he believes to be “strangling” the UK."

The 2012 planning documents cited by the Daily Mail – and studied by Carbon Brief – show that its reporting of their content to be highly selective and misleading, per the article. This amounts to another systematic attempt to deconstruct environmental regulations with the critique that they are onerous and lead to dangerous building structures. This kind of position could only be taken if one dismisses the facts of the matter, which are that the retrofit did not include fire sprinklers, and that a non-flammable exterior was available for an additional few thousand pounds. It's actually a result of willful disregard for life safety because of cost issues, not environmental issues.

In fact, the position of the Institution of Civil Engineers (ICE) in their report on Grenfell is an emphasis on maintaining professional competency in the engineering profession with even more oversight of design and construction approaches in the building industry.

A documentary film by Jamie Roberts points directly at the impact of pro-business policies which have permitted these kinds of fires to continue to happen over the last half century:

"The Fires that Foretold Grenfell, a well-researched, powerful documentary, is essential viewing for anyone seeking to understand the causes of and background to the June 2017 Grenfell fire tragedy. It includes harrowing interviews with survivors of five fires across the UK over a span of 45 years, their families and firefighters.

It demonstrates that the inferno which claimed 72 lives was not an accident, but a social crime. It was the result of the pro-big business policies of successive governments which ignored the lessons of five tragic fires, resulting in many avoidable deaths."

This form of denial obviously needs to be thoroughly debunked before it becomes accepted as some kind of talking point, as it's clearly fueled by disinformation put out by the fossil fuel industry which supports people who say things like this. It is at the root of the obstruction of the necessary decarbonization of our built environment and energy production. Not only that, this kind of denial serves to confuse the issues and bury the facts in deliberate misinformation about physics and building construction.

For example, this fire is typical of what happens to steel structures that are fully engulfed in major fires; the building materials are consumed, but the steel frames remain intact. And yet another denial tries to construct an alternate reality about these kinds of structures in The 9/11 Commission Report and other reports by the NIST, which have been deconstructed by the 9/11 Consensus Panel, based upon further evidence obtained in many sources as well as accurate engineering analyses. This has been published in the book, 9/11 Unmasked, which points out that no other high rises have ever been structurally destroyed by fire. The Twin Towers came down at the speed of gravity on their footprints, which points straight at a demolition scenario in order to create a "Pearl Harbor" event.

As has been established extensively in the press, this event was used as a pretext for the Bush administration to instigate wars in the middle east on behalf of their Arab allies in order to procure further fossil fuel resources. Thus denial comes full circle as a tool in its deliberate destruction of human lives and our environment on an almost unimaginable scale of annihilation. That it may lead to the extinction of life on our planet by the end of this century is a responsibility that is shirked by the oil industry in its rapacious efforts to protect its profits.

Update 11/14/18:  There is a huge fight by the fossil fuel industry against cheap renewables.

Update 12/9/18: Large coal holdings investments are held by some of the world’s largest pension funds

Update 10/8/19:  The money behind the climate denial movement