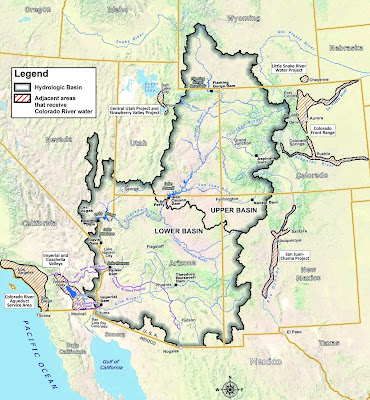 NASA has been mapping underground water reservoirs with its Gravity Recovery and Climate Experiment (GRACE) satellite, which has been operational since 2002. This gives us a picture of the state of the underground aquifers that have been tapped by agriculture. It's used to determine the extent of water resources and how much has been drawn down by pumping and extraction. Quite a lot, it turns out, and the aquifers in the western United States are becoming badly overdrafted.

Jay Famiglietti, head of the UC Center for Hydrologic Modeling, and member of the Santa Ana Regional Water Quality Control Board, has been using these maps to point out the need for management of this groundwater depletion. In 2014, he made the point that "In the future we're going to see big inequities. As the water table drops, it becomes more expensive to pump. You may have to dig a deeper well, which is very expensive. As you get to lower levels of groundwater, the quality degrades so there's that treatment cost. Smaller farmers may go out of business. That's the future."

Well, now it's 2018 and the future has arrived. A major investigation of the impact of dwindling aquifers in Arizona by the New York Times has made it abundantly clear that the overdraft of these aquifers is unsustainable and possibly unrecoverable. It's a long story that's critically important, and it's unfolding all over the planet.

This overdraft is the direct result of industrial farming that has grown in Arizona, which is causing local wells to go dry for residents and small farmers. The big industrial farms can afford to build deep wells with large pumps to supply their crops - generally very water-intensive crops. This is known as "groundwater mining", which is going on in all of the western states that are extracting groundwater to the point that the ground has sunk by many feet in Arizona, but especially in California's San Joaquin valley which is the vast agricultural central valley that grows thirteen percent of the nation's produce.

"Dr. Jay Famiglietti and his team noticed that many of the most significant sites of water loss were actually below ground. Of the planet’s 37 major aquifer systems, they discovered, 21 were on the verge of collapse. In the Great Plains, farmers had exhausted a third of Ogallala’s potable water in just 30 years. In California, the Central Valley aquifer was showing signs that it could drop beyond human reach by the middle of this century. But the worst declines were in Asia and the Middle East, where some of the planet’s oldest aquifers were already running out of water. “While we are so busy worrying about the water that we can see,” Famiglietti told me, “the water that we can’t see, the groundwater, is quietly disappearing.”

This has resulted in the loss of many small family farms, to the extent that some of them are now facing the prospect of being turned into residential developments, which use far less water, but demand tremendous amounts of energy and fuel use. And land that is paved over no longer absorbs the water necessary to replenish the aquifer. So the problem isn't getting solved, but merely kicked down the road. Multiply this scenario all across the planet, and we can now see that water is becoming more and more scarce as these aquifers dry up, along with the shrinking lakes, rivers and glaciers due to climate change.

As the water disappears, the ecosystem disintegrates and fades into dirt. And that's when our human existence faces its inevitable trajectory, which no amount of energy can reverse.

Update 9/3/18: Most ecosystems risk ‘major transformation’ due to climate change

Update 9/7/18: The sinking of California - subsidence in the central valley

Update 11/23/18: The Central Valley is sinking: drought forces farmers to ponder the abyss

Update 6/9/19: California's Central Valley has one of the worst subsidence crises in the country.

Update 6/12/19:  Can California Better Use Winter Storms to Refill its Aquifers?

Update 6/17/19: THE DREAMT LAND Chasing Water and Dust Across California  By Mark Arax

Update 7/25/19: Sustainable groundwater management is inherently connected to the long-term survival of the Bay Delta

Update 8/25/19: We ate ourselves alive until the system collapsed, thus California's Sustainable Groundwater Management Act goes into effect in 2020.

Update 10/5/19: Almost 20 percent of the catchments areas where groundwater is pumped suffer from a flow that is too low to sustain freshwater ecosystems.

Update 2/19/20:  Subsidence of the California Aqueduct in the San Joaquin Valley - MWD findings

Update 4/16/20: California has launched a landmark effort to save its groundwater.

Update 5/14/20: Groundwater: The charge to recharge needs to be data driven


Update 8/21/20:  State Must Analyze Practice of Dumping Billions of Gallons of Wastewater Into Sea

Update 9/3/20: California has started to implement its Sustainable Groundwater Management Act (SGMA) with a goal of reaching groundwater sustainability in over-pumped basins by 2040 or 2042.

Update 9/4/20: Groundwater over-pumping is breaking and sinking the land on which thousands of people and families farm, work, and play.