A Letter from Gaia


Last week, as leaders from across the world gathered for the Global Climate Action Summit (GCAS) in San Francisco, hundreds of people, with Indigenous and frontline leaders out front, took to the streets outside the convention center, marching right up to the entrance to demand real climate leadership, not half-measures.

It was fitting that the summit took place in California, a state that has done a lot to incentivize renewable energy, yet continues to also be a substantial oil and gas producer. While California’s Governor Brown talks a good game on climate change, he’s resisted any effort to take on the state’s oil and gas producers.

The rationale for tackling California’s oil and gas production couldn’t be more clear, and now with a new video that Climate Truth Org created with our partners at Oil Change International, the logic is plain to see for anyone with a minute to spare.

Inside the summit, elected officials, celebrities, and business leaders patted themselves on the back for their work on renewable energy programs and other efforts to reduce fossil fuel demand. But a critical half of the conversation was missing: Standing up to the fossil fuel industry to keep fossil fuels in the ground.

While the eyes of the world were on GCAS, we teamed up with our partners in the Brown’s Last Chance coalition to reframe the definition of what real climate leadership looks like. And we were successful! We made it clear: If decision makers like California’s Governor Jerry Brown aren’t working to keep fossil fuels in the ground, then they cannot consider themselves climate leaders.

If Governor Brown really wants to be the climate leader he claims to be, he must put California on a path of managed decline of fossil fuel production in the state. With just about 100 days left in office, this is Brown’s Last Chance! We know what’s necessary from our elected leaders like Gov. Brown: political courage, not more talk. We know that climate action that ignores people and gives Big Oil a pass is unacceptable.

Together, we’re going to keep making noise, keep making headlines, and keep changing the debate. With your continued support we’ll continue to make a real impact.

Many environmentalists have been tracking the efforts by the Brown administration in California with respect to its climate change policies as well as the international cap-and-trade agreements put into place a decade ago, and have spotted the actions that failed to follow the talk. The fact that he's been relying on oil revenue to balance the state budget was no secret, and Brown replied to the criticism at the summit by saying "politics runs on money".

This kind of fossil fuel activism can reach to the federal level with highly focused actions and programs:

"The Paris Agreement was watered down at the behest of the Obama administration compared to a more rigorous treaty, with common base year and targets, recommended by the European Commission (Spash, 2016a). Obama made clear his commitment to protect American jobs over the environment and specifically over any need to address human induced climate change. In this logic, environmental policy is justified if it creates jobs and growth, which always come first despite the inevitable contradictions. Obama’s administration massively expanded domestic oil and gas exploration to make the USA the worlds largest oil exporter (Spash, 2016a: 70). Non-conventional oil has been part of this strategy, despite the world already having over 6 times the reserves it could possibly burn and still have a ‘likely chance’ of the 2°C target (Spash, 2016b). Obama boasted that under his administration enough oil and gas pipelines had been built to ‘encircle the Earth and then some’ (see full quotation in Spash, 2016a). He ignored the associated ecological and social harm, not least that to indigenous communities. In 2016, Native American protestors at Standing Rock opposing construction work on the Dakota Pipeline that, now operational, transports fracked oil, were brutally suppressed by the combined efforts of the construction corporation’s security forces, riot police and the national guard. All that was before the election of a climate denialist with personal investments in fossil fuels."

As an example of how this environmental policy action develops, here is the Climate Silence Case Study from ClimateTruth.org Action, which is a program of Oil Change USA, a nonprofit organization. It shows how it forced President Obama to address Federal responsibility for climate action policies. 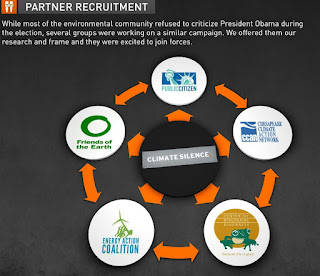