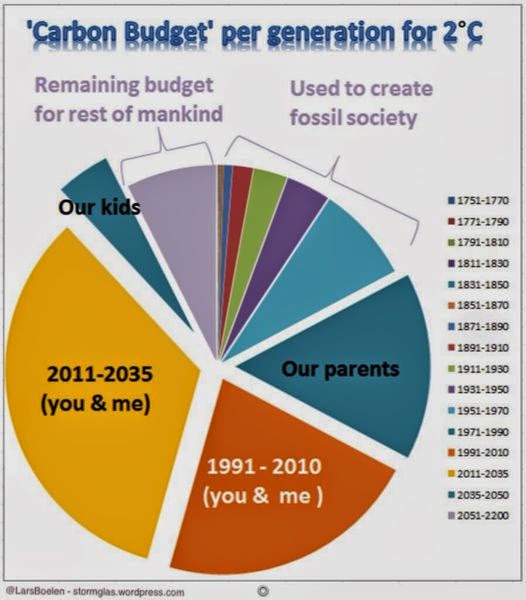 Our world is facing a crucial point of decision making as a civilization, in that climate change must be grappled with very soon, before we enter an irreversible environmental collapse because of our carbon emissions.The graph above shows rather simply that we've almost burned up the entire safe budget of emissions to stay under 2C temperature increase from 1750.

The US Congress needs to support the US participation as signatory to the global climate agreement at COP 21 for carbon emissions. The agreement is scheduled to be finalized via the UNFCCC in December of 2015 in Paris, France. There is a Key Drafting Step in December 2014 (COP 20 in Lima, Peru).

1. This is necessary because we are facing a global climate emergency due to excessive carbon emissions.
2. This deeply impacts every citizen, country and corporation on the planet, thus the US must be present, given its extensive presence in policies and economies of all other countries.
3. The UN is negotiating a total carbon budget with the world; it should be the smallest carbon budget on the table, a precautionary approach. Based upon the preliminary total Absolute Limit IGPG UNFCCC IPCC allowed REMAINING carbon budget of 250 Gt C emitted since 2010 to keep global temperature increases under 2C, it is necessary to allocate future emissions goals to each country. Best estimates are that we have already burned through most of the 1 trillion ton budget overall i.e. going back to ~ 1800 budget and face the necessary implementation of a rapid reduction of carbon emissions to avoid dangerous climate change.

4.The UN is negotiating a rate of carbon reduction with the world based upon equity and fairness with zero carbon emissions by 2050. It is important to agree on a neutral equity framework rather than ones that require damages from richer nations. The US must be at the UN table to defend an equitable framework instead of fighting a "damages" framework like GDR.

"Developing nations see [damages] as a way to underline the fact that the rich have burnt most fossil fuels since the Industrial Revolution. Rich nations say it would take too long to figure out, and that blame is constantly shifting. A related idea by developing nations to ask the IPCC to examine historical responsibility for causing global warming, as a guide to future action in sharing out emissions, is also a minefield at the Warsaw talks...Robert Stavins, director of the Harvard Environmental Economics Program, said it would be disastrous to try to apportion historical blame."

Frameworks that attempt to address this by incorporating a GDP formula are bound to fail because of the arbitrary nature of that metric.It's already outdated as a basis for a true measure of economic value because it ignores damages and risk and relies on growth. This would be the GDR framework as well as others that import arbitrary GDP formulae that distort the emissions budget allocations along economic lines to the point where the first world countries are pushed into "negative emissions" and will therefore never agree to or comply with such a framework. Carbon doesn't disappear from the environment because you pay money to someone.


One framework that works fairly is Contraction and Convergence, by GCI. It is based purely upon the science of carbon impact on global climate and resulting concentration of atmospheric gasses. We must return to a carbon level of 350ppmv in the atmosphere for a safe climate; we are now at 400ppmv, according to global carbon emissions measurements.

5. Leadership is necessary in Congress to achieve these ends. Ways to accomplish the carbon reductions to meet our agreed emissions goal are:
A graphic demonstrating how these can work in concert is here. It's all do-able, and can generate tremendous global revenue, but the need to forge consensus has become urgent, and all of us must be at the table to achieve a global climate agreement. Nothing else really matters any more.