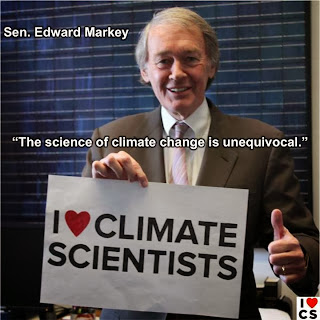 The Obama administration took a strong position on climate change earlier this year:

“For the sake of our children and our future, we must do more to combat climate change. If Congress won’t act soon to protect future generations, I will.”
-- President Obama, State of the Union, February 12, 2013.

In summary, from the League of Conservation Voters, "In June 2013, President Obama unveiled a comprehensive Climate Action Plan. The central pillars of this plan are: reducing carbon pollution from the nation’s biggest emitters, coal-fired power plants and cars; reducing energy consumption; expanding clean energy; preparing for global warming’s impacts on our communities and natural resources; and leading international efforts to address climate change. This plan builds on important progress undertaken since President Obama took office. In December 2009, the Environmental Protection Agency made the determination that carbon dioxide and other heat-trapping gases pose a danger to public health and welfare. This science-based endangerment finding, a result of the Supreme Court's 2007 decision in Massachusetts v. EPA, gives the EPA the authority and the responsibility under the Clean Air Act to hold polluters accountable by limiting the carbon pollution they dump into our atmosphere."

This was prior to the just-released IPCC's AR5 report, which established the scientific findings on rising carbon emissions and the impact on climate change. With that, and a ruling by the Supreme Court on Oct. 14 that the EPA may proceed with regulations on vehicle exhaust and power plants, the US government is moving very quickly with an effort to establish these guidelines. U.S Senator Edward Markey has now politically stepped up to bat with an article in The Hill:

Just a couple of weeks ago, the Nobel Prize-winning Intergovernmental Panel on Climate Change said for the second time that the evidence that the planet is heating up is unequivocal, after they did so first back in 2007. They have also once again charged, tried and convicted the main culprit: carbon pollution from burning fossil fuels.

Last week, the U.S. Supreme Court upheld that conviction. They also reaffirmed that the Environmental Protection Agency has the legal authority to require reductions of dangerous heat-trapping emissions, just as it does for smog, mercury and other harmful pollution.

This has unleashed the programs held in check, and now the ball is in play, which is what the EPA's current rapid outreach and public discussion process is about all over the nation. There are now public dialogues being scheduled by the EPA.

With that, there is also a turning point in the public dialogue, because responsible publications are now refusing to print unscientific disinformation that has shut down the open dialogue about moving off of fossil fuels.The Los Angeles Times stepped into the forefront of the public dialogue with its refusal to print unsubstantiated climate denials.Other news outlets have followed suit, as noted by an article in Mother Jones. Bernie Sanders, the U.S. Senator from Vermont, has even taken his platform to Playboy magazine, tying the climate issue to national security issues.

Perhaps now the long dark night of pollution is finally coming to an end, and hope for effective action is in sight.

Update 10/27/13: A Stanford professor, Mark Jacobson, explains to David Letterman how energy sources are being transitioned to phase out fossil fuels entirely by 2050.