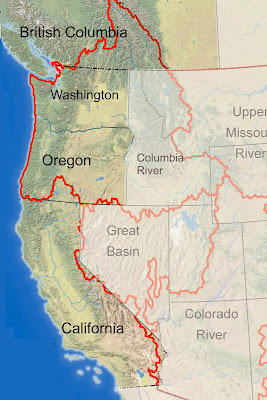 California Governor Jerry Brown has signed an agreement with Washington, Oregon and British Columbia to align climate change policies and promote clean energy. This represents another attempt, through voluntary means, to set policies across a region. The idea has a long history, famously portrayed in Ernest Callenbach's Ecotopia, published in 1975. This concept has been evolving for years, including an earlier attempt when seven Western states and three Canadian provinces created the Western Climate Initiative. One of their proposals was a cap-and-trade system, but the effort fell apart when all the states, except California, eventually pulled out of the coalition, in part because of political opposition.

Naturally the agreement was signed in San Francisco, with Governor Jerry Brown presiding, who also started his original term as Governor in 1975. At that time, Brown held a strong interest in environmental issues. He appointed J. Baldwin to work in the newly created California Office of Appropriate Technology, Sim Van der Ryn as State Architect, Stewart Brand as Special Advisor, and John Bryson as chairman of the California State Water Board.

The Sacramento Bee even noted, "Brown has said this year that California could be a model for Washington not just on governance issues, but in any number of policy areas, including immigration and the environment. State policies addressing greenhouse gas emissions and global warming have been replicated by the federal government and other states for years.

“It just so happens that things are happening in California that are not happening in Washington,” Brown told reporters after an event in San Francisco last month. “It just has dawned on me that we can do a lot of things in California to shift the climate throughout the whole country.”

He compared California to a lever and quoted a Greek mathematician: “Archimedes said, if you give me a place to stand ... I can move the earth.”

It's being called a model for innovaton in policy and in the development of a cap-and-trade system for carbon emissions. The pact also calls for building a coalition of support to press for an international agreement on climate change in 2015.

“This agreement will show the world that the Pacific Coast states aren’t waiting for Congress or governments worldwide to tackle climate change. This unprecedented pact between the governors of California, Oregon, and Washington, and the premier of British Columbia, will encompass a population of 53 million in the world’s fifth-largest economic region so it can have a major impact on our climate and clean energy future, providing, of course, that the governors and premier follow up this commitment with action on the ground.

“Forging a clean energy future and taking substantial steps against climate change, which knows no borders, will carve a path for others to follow. We need more regions and governments to get serious and collaborate if we are to stave off the worst effects of global warming. State action to support President Obama’s climate plan is critical to meeting our carbon pollution reduction goals.”