A Call to Leadership 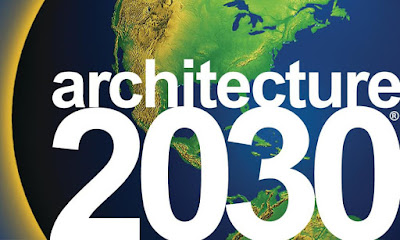 Architecture 2030 is a non-profit, non-partisan and independent organization established in response to the climate change crisis in 2002. It was started back then by architect Ed Mazria, who wanted to develop building standards for the industry that embraced the UNFCCC carbon protocols and position the industry to be ahead of the game instead of behind it. At the time, it was a challenge to the American Institute of Architects (AIA), which was mostly involved with incremental code changes for energy efficiency. It wasn't a case of exhibiting leadership in environmental issues.

By 2014, the architecture profession had embraced the radical decarbonization of the built environment outlined by Architecture 2030 criteria and showcased Ed Mazria, FAIA as the keynote speaker at the national convention that year as an industry game-changer. Its ZERO Code is a pathway to zero net carbon buildings and has now been fully embraced by the AIA. At the same time, the International Union of Architects (UIA) World Congress, member organizations representing over 1.3 million architects in 124 countries worldwide unanimously adopted the 2050 Imperative, a declaration to eliminate CO2 emissions in the built environment by 2050

Meanwhile Mazria, who has become something of a building-sector Al Gore, appearing at global conferences with pie-chart slides, says he believes another industry-wide strategy could curb carbon emissions even faster than policy. “Twenty percent of all the construction in the world is influenced by a small percentage of AEC firms. That’s where the power is,” he says.

Mazria praises the precision of the global building sector, which has managed to reduce carbon emissions since 2015 even while floor area has expanded. That success story has been under reported, partly because the world is understandably more focused on record-breaking overall carbon emissions in 2017 and 2018. But Mazria believes AEC firm leaders could flip the graph during the next few critical years. He’s focusing on relationships with CEOs at the AIA’s Large First Round Table, a group that meets twice a year. Nearly all those firms have signed on to the 2030 Commitment, which, since these giant firms bill internationally, has a global impact. Mazria has brokered carbon neutrality commitments from CEOs at major AEC firms in other countries too, including China. “We understand the issue. We’ve had an awakening,” says Mazria. “Now we just have to be very, very aggressive. If we don’t solve it, it doesn’t get solved. It’s as simple as that.”

Recently the AIA has formally set out specific policies to provide a framework for the AIA to prioritize and support urgent climate action to exponentially accelerate the “decarbonization” of buildings, the building sector, and the built environment.

On the first day of the AIA Conference on Architecture on June 10 of this year, a Resolution passed -- overwhelmingly -- for AIA to:
This is a victory for AIA's Committee On The Environment and many other groups and people who have been advocating for architects and the AIA to take a leadership stance on climate change, as its impact is seen in every community.

But this is not a proposed solution. It is a call for action.The membership has spoken and the imperative is clear.This means not only a major change in practice, but also a cultural change.

There is big work ahead.

Update 10/7/19: We are in the midst of a climate emergency and timing is everything.

Update 11/12/19: Mazria - Impact that the architecture and building industries could be having on climate change.