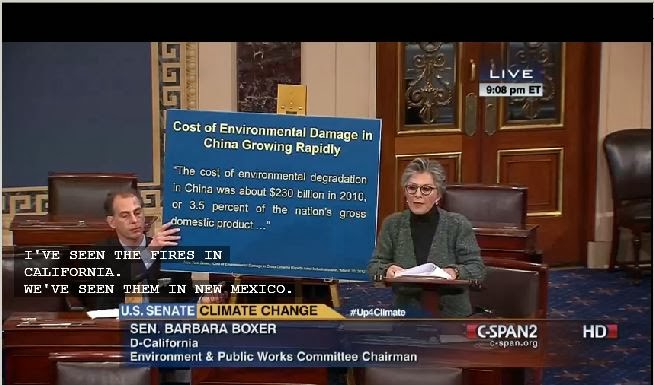 It feels like I'm no longer screaming into the wind. Last night 28 Senate Democrats held an all-night session presenting the myriad points about the need for climate action, livestreaming on C-span. These are the members of the Senate Climate Action Task Force, headed up by Bernie Sanders, and taking the policy cue from the President's Climate Change Action Plan, upon which he has based some executive actions.

The discussion basically went through the IPCC AR5 report point-by-point, establishing that there is a global emergency that must be addressed quickly and forcefully. These Senators have been working for months to craft a position that will allow legislation to be passed by the entire legislature in future sessions. It needs to be a bipartisan effort, and they spoke at length about that issue. They decried the partisanship that has arisen around climate change, which is a legacy of the collapse of the Democratic legislative efforts to limit greenhouse gas emissions.

A significant plank in this legislation would be phasing out the fossil fuel subsidies, a point raised in the discussion. The International Energy Agency estimates that the phase-out of fossil fuel subsidies – which amount to more than $500 billion every year globally – would lead to a 10 percent reduction in greenhouse gas emissions below business as usual by 2050. These subsidies, which incentivize emissions, sadly dwarf the paltry incentives to reduce them. Free marketeers, small government advocates, and others who dislike distorting government subsidies should be appalled at the tax money poured into fossil fuels.

The stakes for the entire world have never been higher. Rebecca Solnit describes the magnitude of global climate change, and how it now literally threatens our existence. Yet we continue to fiddle away...

Documentation of this session from the US Congressional Record is here.