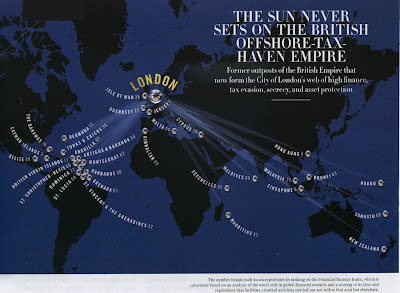 The April issue of Vanity Fair has an in-depth article on the network of offshore tax havens that support the corporate shell holdings in Hyde Park in London. It's one of many articles and studies that have appeared recently because of the scale of this problem. Other publications have examined this issue in broader scope, such as Financial Services Technology 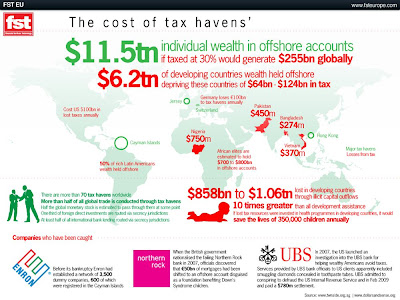 and our very own U.S. Government Accountability Office 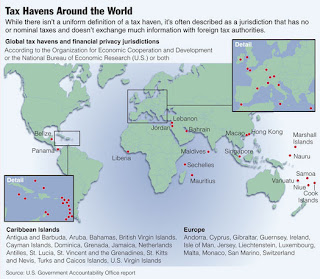 The discussion of this issue has come to the forefront because tax evasion by multinationals and corrupt leaders has emerged as a key issue ahead of the third substantive meeting of a UN high-level panel this week to discuss a framework for global development after 2015. It's basically follow the money, and the developing countries are trying to structure their tax bases rather than relying upon foreign aid, and this requires transparency in global capital flows. Paul Krugman speaks out on it with respect to Cyprus, whose banks are on the brink of failure due to the capital parked in their accounts from expat Russian money: "But the truth, hard as it may be for ideologues to accept, is that unrestricted movement of capital is looking more and more like a failed experiment".

These capital flows are critical for support of not only the emerging global economies, but also as a means to fund the essential changes in all countries for providing carbon-free energy and conserving remaining natural resources and watersheds.The transfer from the old carbon-based energy sources will necessarily happen quickly, and so the capital must be made available. But how should this capital be captured and allocated?

As it stands right now, governments are legally taxing vibrant small-scale capital, while the old capital that resulted from the earlier industrial development and later corporate growth flees into tax havens. The capital generated from the developed countries, especially the USA and Canada, were generated from the old railroad industries that started with coal, and employed the railroads to develop land that was essentially given to them for free by the government during the expansion phase of the 13 colonies as they evolved into the 50 states. This shifted later on into the oil industry that again used government subsidies to develop roads and highways, and the auto industry came into prominence. During this time, the oil resources claimed by the oil industry were nationalized by various governments in the Middle East (OPEC) and South America. As industries evolved through WWII, their growth came from global industry and government military contracts which funneled money to other governments and countries throughout the world. Technology emerged in the 1970's that basically drove a massive expansion into the digital and electronic information industry, much of which was outsourced to third world economies. Not only that, as the corporate sector bloated in the 1980's and beyond, the banking sector became way outsized in the global economy in the late 1990's, driving speculation into a bubble which the world economy has yet to recover from. These hot spots of banking have coalesced in illegal tax-free havens that are very small countries unto themselves and don't support a large local population. They're entities that basically bleed the money system and exist as private corporate vaults, and the scale of this top tier money, especially in the last decade, has become unprecedented, particularly the expat money from Russia. Meanwhile this top tier money (legal and illegal - drug trade and arms) consumes the resources that belong to global citizens and the natural ecosystem of the planet.

Because of this situation, it now appears that international capital flow restrictions are going to become the only rational way to balance global capital flows and put them to use effectively, whether for ecological restoration, carbon emissions reduction or rebuilding industry and human habitats. These capital flows, as one can see, are funneled through scattered tax havens in quantities that dwarf even the large economies of North America and Europe, and China's economy (its government) has yet to shed its veil. It's a wicked problem.

One method which could address this problem is to establish currency zones that capture these tax havens as well as countries that have large populations and balance out the capital flows with a "regional" approach. It could work in tandem with a regionalized trading system that supports local resource preservation rather than immense supply chains fueled by cheap oil. The scale of these systems must be brought into congruency in order to support the necessary shift in human activities that await us in the future.

Update 4/4/16:  Huge document leak exposes shell companies
and this shows how it's done

Update 5/5/16: Shell corporations are effectively located in the US in these states, which are then used to hide the offshore accounts.

Update 5/13/16: The western banking system has assisted the world’s kleptocrats and tax dodgers.

Update 6/1/17: The ultra-rich are hiding way more money overseas than anyone realized

Update 6/5/17: Study: The ultra-rich hide 25 percent of their wealth in tax havens

Update 11/6/17:  Paradise Papers Shine Light on Where the Elite Hide Their Money

Update 11/11/17: How Corporations and the Wealthy Avoid Taxes (and How to Stop Them)

Update 2/7/18: Apple paying a record tax because of its last two decades of global tax avoidance

Update 5/7/18:  IMF’s Board of Directors has approved an anti-corruption “framework” policy.

Update 7/1/18: The real beginning of the end for tax havens has begun

Update 9/9/18: Moneyland ratchet: Money flows across frontiers, but laws do not

Update 9/25/18: Up to half of global offshore wealth is hidden in British jurisdictions.

Update 10/13/18: How the citizen schemes stack up, by global region

Update 10/16/18:  A blacklist of 21 countries that threaten international efforts to combat tax evasion

Update 10/31/18:  The vast wealth and power of corporations is at the heart of inequality and climate change.

Update 11/1/18: How corporate dark money is taking power on both sides of the Atlantic

Update 1/21/19: U.S. individuals, by Zucman’s estimate, “are evading $30 billion a year [in taxes] through unreported offshore assets,” while U.S. multinational companies are avoiding $120 billion “by artificially shifting profits to Bermuda and similar places.”

Update 2/10/19: In 1991 the collapsing USSR shoveled billions from the state treasury into private accounts across Europe and the U.S. in one of history’s greatest heists.

Update 6/16/17: Anonymous companies are getaway cars for the world’s criminal and corrupt

Update 7/30/19: Money is hoarded at the top. The super rich decimated polity and then turned to extremists to protect them.

Update 9/30/19: Secrecy World: Inside the Panama Papers Investigation (The Movie "The Laundromat")

Update 7/17/21: Shut down the Tax Havens
Update 8/10/21:  In the 21st century, Fascism cannot exist without an offshore system.
Update 10/11/21: Lawmakers seek crackdown on financial 'enablers'
Update 4/6/22: Why Tracking Putin’s Wealth Is So Difficult
Update 4/24/22:  He knew that the leverage we had over him was his foreign money. Per the Panama Papers.