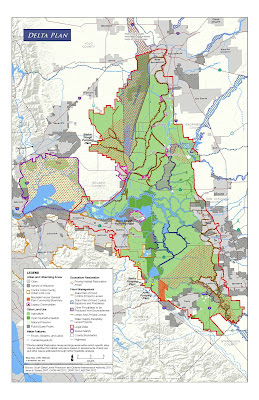 The Bay Delta Water Plan is once again in the forefront of a major statewide debate about how to manage water infrastructure for a state that is already on the brink of its ability to supply water and manage it in a way that preserves the environment. I've covered this issue in several posts, along with concerns that the plan is grounded more in politics and money than science and ecology that would regenerate the natural processes that the entire state relies upon.

As a new water agency, the Delta Stewardship Council, formed by the 2009 California Water Legislation, is tasked with developing a Delta Plan.  As stated in their website, "The Delta Stewardship Council is charged with protecting the Sacramento-San Joaquin Delta and the critical role it serves in the water supply for millions of Californians and its unique ecosystem and way of life." A draft Delta Plan is online here, and can be reviewed and commented on by the public. There's already a major backlash from the Restore the Delta folks, who are angry that a conveyance canal is built into this plan, as well as insufficient development of the critical levee system in the Delta. Another issue, the critical costs and actual ratepayer bill for this plan, is being challenged via AB 2421. Food & Water Watch, Southern California Watershed Alliance, and Green LA Coalition challenged the Metropolitan Water District (MWD) for its opposition to an independent cost-benefit analysis of the proposed multibillion-dollar Peripheral Canal or Tunnel project which is incorporated as part of this plan.

The water agencies and the farming community are in favor of the plan as presented, since the proposed canal is considered the only way to provide adequate water for the planned future development in the southern part of the state, as well as to the agriculture in the central valley.

Cal Watchdog has a more critical view of what may be considered absent issues in the report, including the documentation of kinds of water available and where these water supplies should be transported to. Unfortunately the plan still relies upon the "plumbing model" of water management. It basically follows the money, not science or ecology. Alternate strategies such as using the storage capacity of existing underground water basins are also suggested by the same author in another article, published this January. It's a political history of the Bay Delta situation.

The big question here is, can more growth be accommodated? It's the historic engine of California's prosperity that right how has taken a massive hit due to the Wall Street boondoggle of leveraging debt. So the political climate right now may preclude a more enlightened set of strategies around the water supply issues. California will very likely end up being a very dry state with extremely high water and power rates due to a lack of vision in water management, and absent conservation based upon ecological principles. This could prove to be the demise of the state's capability to provide a fundamentally sound ecosystem supported by the natural systems which were formerly so abundant.