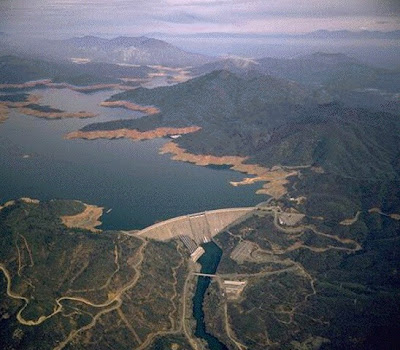 The official public battles have begun. Rationing, much higher rates, private water company monopolies have resulted in an uproar in front of the CPUC. The Star-News documents "blaming the customer" in an article, attempting to re-define landscape watering as "unreasonable use", allowing claw-backs of the traditional allocation systems based upon development of early infrastructure.

Metropolitan Water District of Southern California, which provides water to 18 million people, is expected to adopt a water supply alert resolution at its board meeting on Tuesday.

"We are hoping people will ramp up voluntary conservation with the idea of saving water for this year," said Bob Muir, spokesman for the MWD. "This is the last action before the board starts allocating supplies."

An allocation plan gives member agencies a limited supply of water resources. If the agency exceeds its supply, it could pay up to four times Metropolitan's highest priced water, depending how far they exceed their allocation.

District officials are hoping that extraordinary conservation will reduce demands throughout Metropolitan's service area, and would help preserve the region's reserves.

This year, MWD expects to tap into its water reserves and use a quarter of the 2 million acre feet it has saved since the 1980s. An acre foot, which is enough water to supply an average family of four for one year, is equivalent to about 326,000 gallons.

"Everything is geared to try to maintain reserves through the summer and next fall so that we have water in the bank for next year," Muir said.

The next level of conservation would still be voluntary, and could include the district encouraging its member agenciesto call for a reduction in water use, increased rates for consumers that use too much water and turning to water schedules.

Southern California is grappling with increased demand, record low rainy seasons and a reduction in imported water supply in the San Joaquin-Sacramento River Delta and the Colorado River.

MWD pumps water from both the delta and Colorado River. The MWD board of directors earlier this year voted to increase 2009 water rates by 14 percent.

"Now, more than ever, it is time to conserve," said Tim Jochem, general manager at the Upper San Gabriel Valley Municipal Water District, which is headquartered in El Monte. "With voluntary reduction in water use, that will prevent us from going into a water crisis."

MWD is encouraging all of its 26 member agencies, such as Upper San Gabriel Valley Municipal Water District, to adopt drought ordinances and enforce conservation ordinances.

Such measures could include tiered rate structures that promote conservation, restrictions on the hours of outdoor watering, prohibitions on landscape irrigation runoff, hotlines for the public to report inefficient or prohibited water use, and more rebate programs.

"In order to prevent us from rationing, we would like people to do extra ordinary conservation," said John Morris, an MWD director who represents San Marino. "I think this is the right approach to take."

Among the recommendations are cutting back outside irrigation.

"In San Marino, 75 to 80 percent of water is used outdoors," Morris said. "Lets say you are watering your lawn four days a week. Reduce it by one day. It won't hurt your plants."

MWD officials predict that if the conservation efforts are adopted, then it could result in a 25 percent savings, or 195,900 acre-feet.

Some cities and water companies have already taken action in finding ways to cut back water use. Since November, Azusa Light and Water has called for its consumers to cutback outdoor water usage or face a fine.

City officials also made plans to shift city cash reserves into a "catastrophic reserve" fund in case of a water crisis.

The REALITY of this is that the State infrastructure never faced the future maintenance or population growth issues.

"The current State Water Project was designed to handle a population that peaked in California in 1990. The Peripheral Canal of the early 1980s was actually Phase II of the original State Water Project. When it was ultimately defeated by the voters with no new plan put forward, the practical impact was continued growth unsustainable under the current infrastructure."

Add to that, this was designed using rainfall projections before climate change kicked in, reducing anticipated natural available resources such as rain and snowmelt. The environmental conditions going forward are now considered permanent drought.

According to Norrie Hunter: It is clear that whatever future plans are adopted, SWP contracting agencies will, in the future be required to micro-manage their water resources alongside such new strategies that include water recycling, water conservation, groundwater recharge and banking, conjunctive management of surface and groundwater resources, treatment of contaminated groundwater basins, water transfers/marketing, and brackish and ocean water desalination.
Posted by LPB at 4:06 PM
Newer Post Older Post Home